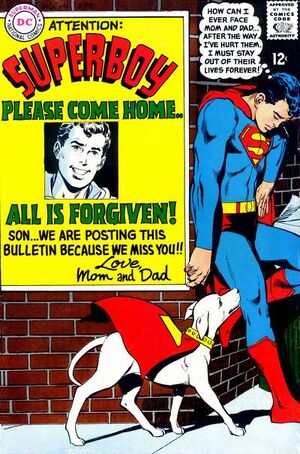 Appearing in "The Runaway Superboy!"Edit

Synopsis for "The Runaway Superboy!"Edit

Superboy inexplicably destroys his robots and equipment and becomes a runaway in disguise. On the road, he helps one boy reconcile with his father and another one gain adoptive parents. But, despite posters which urge Superboy to return to his parents, he remains a runaway.

This story is reprinted from Superboy #79.

Retrieved from "https://heykidscomics.fandom.com/wiki/Superboy_Vol_1_146?oldid=1600128"
Community content is available under CC-BY-SA unless otherwise noted.