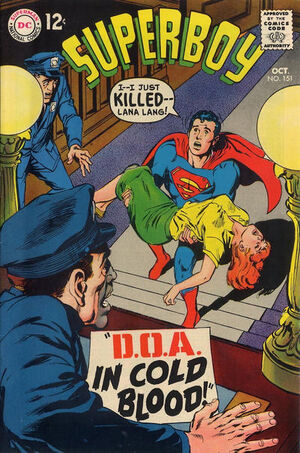 I swear by the Holy Sun of Krypton I will not try to escape from this cell until I'm cleared of this charge!

Appearing in "D.O.A. - In Cold Blood"Edit

Synopsis for "D.O.A. - In Cold Blood"Edit

Anton Lumar, a photographer, scientist, and thief, discovers a way of creating 3-D "living" images composed mostly of lead sulphides and uses his device to frame Superboy for the "murder" of a 3-D image of Lana Lang while he steals a priceless gem and holds Lana hostage. Despite being in a cell he has sworn not to leave before being cleared, Superboy uproots the cell from the Smallville jail and flies it and himself to Lumar's hideout, where he and Lana manage to capture Lumar.

The earliest mention of Krypton's sun (Rao) being a religious icon to Kryptonians. -- see quote above.

Retrieved from "https://heykidscomics.fandom.com/wiki/Superboy_Vol_1_151?oldid=1687780"
Community content is available under CC-BY-SA unless otherwise noted.