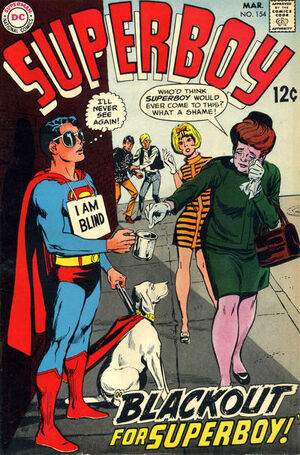 Appearing in "Blackout for Superboy!"Edit

Synopsis for "Blackout for Superboy!"Edit

Superboy rescues a fisherman who places a second adhesive emblem on top of Superboy's chest. The emblem contains a transmitter which allows the fisherman to fire a heat ray from long range that makes Superboy think his heat vision is out of control. Superboy dons a pair of lead glasses and summons Krypto to lead him without sight. Though his crime fighting abilities are hampered, Krypto's assistance allows him to continue. Dr. Dento, the fisherman, then tries to eliminate Krypto with synethetic Red Kryptonite. Superboy removes the lead glasses to help Krypto and learns that his eyesight is normal. Krypto discover the emblem transmitter which leads them to Dr. Dento, who is then taken into custody.

Retrieved from "https://heykidscomics.fandom.com/wiki/Superboy_Vol_1_154?oldid=1687782"
Community content is available under CC-BY-SA unless otherwise noted.