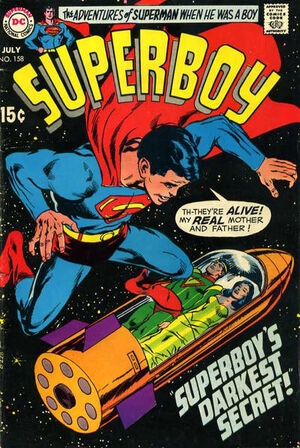 Superboy receives a radio message which comes from a recording made by his father Jor-El. He gets a fix on its location in outer space, discovers the bodies of his parents, Jor-El and Lara, in a floating space-capsule “coffin” radiating Green Kryptonite rays. A Kryptonian villain named Xonar, formerly Khai-Zor, an enemy of Jor-El's, almost knocks him into the Kryptonite with shaped charges, but another Kryptonian, Dr. Krylo, rescues him.

Krylo explains that he had believed Jor-El's prophecies of doom for Krypton, developed a form of suspended animation which he hoped would preserve himself and Jor-El's family in space “coffins” to be flung into space by the explosion, with tape-recorded instructions on revival procedures included.

After Kal-El's rocket was sent into space and Jor-El finished his last journal entry, Krylo ray-gunned both Jor-El and Lara down, subjected them to suspended animation treatment, and placed them in a space capsule equipped with a taped message for Kal-El, to be activated when he came of age. Seconds later, Krylo's robots did the same procedure for him and placed him in another space capsule. Both capsules were rocketed into space only minutes before Krypton exploded.

Both capsules were found by Xonar, formerly Khai-Zor, whose partner Val-Arn had perished in the cataclysm; Xonar himself survived Krypton's destruction in a rocket he had built similar to Jor-El's plans. Xonar revived Krylo and used the taped message of Jor-El's to lure Superboy, son of his old enemy, into a trap.

In the conflict that follows, both Xonar and Krylo die, but Superboy manages to get Jor-El's and Lara's capsule back to Earth with the help of a space-suited Jonathan Kent.

But Jor-El's tape is activated shortly thereafter and plays all the way through. The voice of Jor-El tells his son and his son's foster father that Jor-El had been irradiated with killing radiation while on an expedition into Krypton's interior, which radiation he passed along to Lara, inadvertently, but not to Kal-El. Since the incurable radiation would doom them both to a slow, lingering, painful death if they were revived, Jor-El asks that Superboy leave them both lifeless in space, should Krylo achieve his objective of preserving them against his will. Sadly, Superboy and Jonathan Kent return the capsules to outer space.

Retrieved from "https://heykidscomics.fandom.com/wiki/Superboy_Vol_1_158?oldid=1622319"
Community content is available under CC-BY-SA unless otherwise noted.