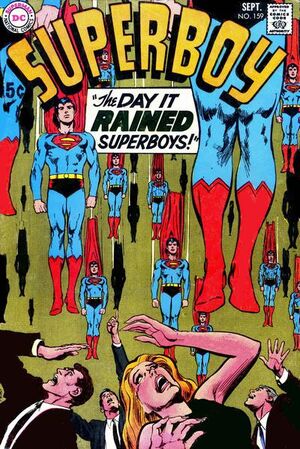 Appearing in "The Day it Rained Superboys!"Edit

Synopsis for "The Day it Rained Superboys!"Edit

An adult Lex Luthor terrorizes the world with a Superboy robot of his own creation, which the world believes is the real Superboy, or multiple Superboy robots. The military forces of various nations destroy Superboy's robots, but Luthor, posing as “Dr. Rothul”, offers his resource of refined Kryptonite to the American military--for a price. Superboy sends his Clark Kent robot, disguised as an alien super-hero named Voltran, against Luthor's Superboy robot, destroying it and exposing a cache of Kryptonite within it. Luthor reveals himself, and Superboy, out of range of the Kryptonite, captures him.

Retrieved from "https://heykidscomics.fandom.com/wiki/Superboy_Vol_1_159?oldid=1622320"
Community content is available under CC-BY-SA unless otherwise noted.