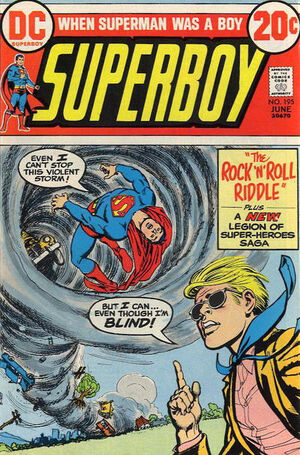 I know it isn't polite to point -- but you'll have to forgive me!

Appearing in "The Rock 'n' Roll Riddle of Smallville!"Edit

Synopsis for "The Rock 'n' Roll Riddle of Smallville!"Edit

A blind youth discovers that the destructive storms around Smallville are being caused by an ultra-high frequency from a certain song being transmitted from the local radio station. The teenager confronts the deejay and the gang of crooks on his own, but Superboy quickly comes to his aid.

Appearing in "The One-Shot Hero!"Edit

Synopsis for "The One-Shot Hero!"Edit

A new candidate for the Legion comes in the form of Erg-1, a teen who was converted into energy which is stored in a containment suit, but he also has a secret power which he can use only once — thus dooming him.

Retrieved from "https://heykidscomics.fandom.com/wiki/Superboy_Vol_1_195?oldid=1568125"
Community content is available under CC-BY-SA unless otherwise noted.