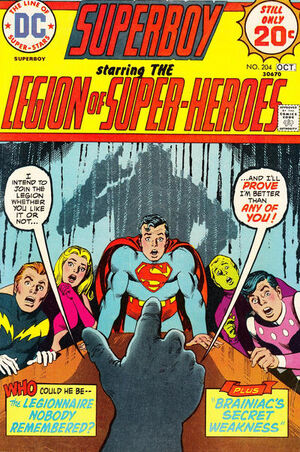 Who was that other member? Who was Anti-Lad?

Appearing in "The Legionnaire Nobody Remembered"Edit

Synopsis for "The Legionnaire Nobody Remembered"Edit

A glitch in the time-stream causes the Legion to reject Superboy for membership, and a youth goes back in time to audition for membership as Anti-Lad and repair the time-flow.

Brainiac 5, who has been putting in long hours and mooning over the absence of his love Supergirl, has created a Supergirl android in his sleep and programmed her to love him. When Brainiac and Star Boy go on vacation, the Supergirl android appears. Brainiac is convinced the android is the real Supergirl, and that she loves him, so he resigns from the Legion and heads into a radiation belt in space by accident. He is rescued by the real Supergirl, but the android, who reveals herself to them, is destroyed by the radiation. Brainiac 5 rejoins the Legion. Supergirl tells him that she cannot cope with being a part-time Legionnaire until she gets her life straightened out, but she may someday return and maybe they can pick up where they left off.

Retrieved from "https://heykidscomics.fandom.com/wiki/Superboy_Vol_1_204?oldid=1459703"
Community content is available under CC-BY-SA unless otherwise noted.