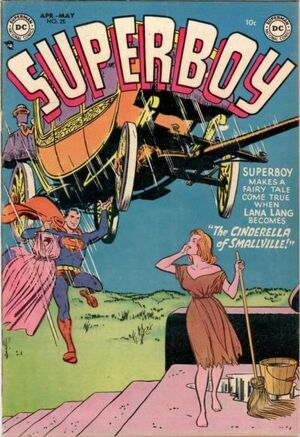 A wealthy Smallville citizen tries to have an art teacher fired for belittling his son’s talent, until Superboy lends the teacher a hand.

Appearing in "The Boy Who Framed Clark Kent"Edit

Synopsis for "The Boy Who Framed Clark Kent"Edit

On a camping trip, Clark Kent is framed by a phony Superboy costume as part of a camper’s plans to get favors for himself and Clark.

Appearing in "The Cinderella of Smallville"Edit

Synopsis for "The Cinderella of Smallville"Edit

After the apparent death of her parents, Lana Lang is sent to live with Mr. and Mrs. Silas Creech, who had hoped to control Prof. Lang’s money. When the payoff is delayed indefinitely until the “deaths” can be proved, the Creechs treat Lana as badly as Cinderella was treated by her stepmother, until Superboy steps in to play “fairy godfather”.

Retrieved from "https://heykidscomics.fandom.com/wiki/Superboy_Vol_1_25?oldid=1459541"
Community content is available under CC-BY-SA unless otherwise noted.