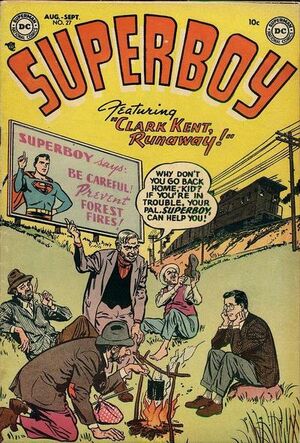 Appearing in "The Pied Piper of Smallville"Edit

Synopsis for "The Pied Piper of Smallville"Edit

A modern “pied piper” seems to have the ability to mesmerize Smallville youngsters into following him when he plays his clarinet--and Superboy must learn his secret.

Appearing in "The Movie Star of Tomorrow!"Edit

Synopsis for "The Movie Star of Tomorrow!"Edit

A movie maker from the 30th Century goes 1,000 years into the past to persuade Superboy to return with him and star in a film that will rescue him from financial ruin.

After a tiff with his apparent parents, Clark Kent runs away from home, and the Kents spare nothing to get him (and Superboy) back.

Retrieved from "https://heykidscomics.fandom.com/wiki/Superboy_Vol_1_27?oldid=1459547"
Community content is available under CC-BY-SA unless otherwise noted.