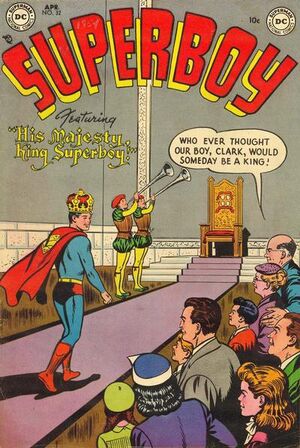 Appearing in "The Silent Doom!"Edit

Synopsis for "The Silent Doom!"Edit

A gangster causes Smallville to suffer a period of soundlessness, and Superboy must find a way of coping with the menace.

Appearing in "When Superboy Couldn't Fly!"Edit

Synopsis for "When Superboy Couldn't Fly!"Edit

Superboy appears to have lost control of his powers after repairing a clock, forcing the mayor of Smallville to ground him.

Appearing in "His Majesty King Superboy!"Edit

Synopsis for "His Majesty King Superboy!"Edit

Smallville turns out not to legally have been incorporated into the United States, so for the week that it takes for the process to be completed, the town becomes the kingdom of Smallvania--with Superboy as its king.

Retrieved from "https://heykidscomics.fandom.com/wiki/Superboy_Vol_1_32?oldid=1459560"
Community content is available under CC-BY-SA unless otherwise noted.