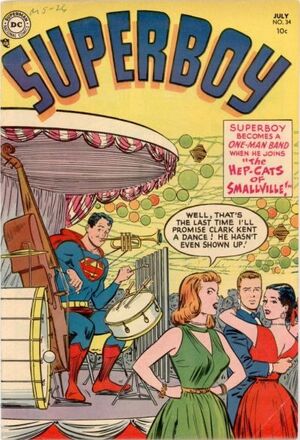 Appearing in "The Jewel of Jeopardy!"Edit

Synopsis for "The Jewel of Jeopardy!"Edit

Lewis Lang tries to stop his daughter and a professor from falling victim to a strange jewel’s “curse”. When he fails, Superboy must find a cure.

Appearing in "The Hepcats of Smallville!"Edit

Synopsis for "The Hepcats of Smallville!"Edit

Nitro Allen, a gangster, tries to stop Smallville’s Youth Band from performing a charity concert, and Superboy must learn the reason why.

Appearing in "The Runaway Rocket"Edit

Synopsis for "The Runaway Rocket"Edit

A series of accidents sends Clark Kent, Lana Lang, and several other Smallville youths into orbit around Earth in a spacecraft, and Clark must find a way of rescuing them all without giving away his secret.

Retrieved from "https://heykidscomics.fandom.com/wiki/Superboy_Vol_1_34?oldid=1459566"
Community content is available under CC-BY-SA unless otherwise noted.