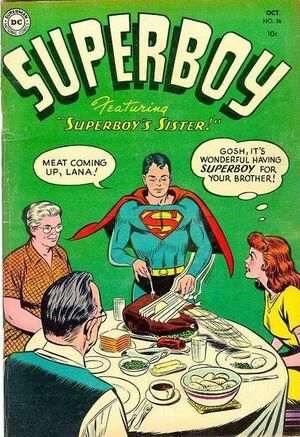 Appearing in "The Superboy Souvenirs!"Edit

Synopsis for "The Superboy Souvenirs!"Edit

Superboy gives approval to a store that sells mementos of his adventures, until he learns that most of the “mementos” were manufactured.

When her parents are reported dead while on a trip to Africa, Lana Lang is allowed to move in with the Kents, which puts a crimp in Superboy’s operations.

Appearing in "The Man Who Knew Superboy's Identity!"Edit

Synopsis for "The Man Who Knew Superboy's Identity!"Edit

A mysterious lead-masked figure called the Mask threatens to expose Superboy’s secret identity unless the Boy of Steel completes strange tasks for him.

Retrieved from "https://heykidscomics.fandom.com/wiki/Superboy_Vol_1_36?oldid=1500312"
Community content is available under CC-BY-SA unless otherwise noted.