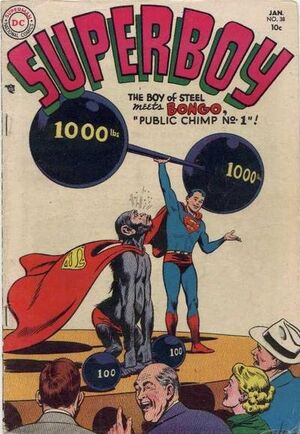 Appearing in "The Impossible Illusions!"Edit

Synopsis for "The Impossible Illusions!"Edit

A magician’s reputation is endangered when a crook uses one of his tricks to pull an escape, but Superboy finds a way to help the magician and catch the crook at the same time.

Appearing in "Through the Eyes of Superboy!"Edit

Synopsis for "Through the Eyes of Superboy!"Edit

A crook deceives Superboy into wearing a badge fixed with a camera that relays a picture of his current location, threatening to expose his secret identity.

A trained chimpanzee TV star runs away, and Superboy tries to find him. Unfortunately, a gangster is also interested.

Retrieved from "https://heykidscomics.fandom.com/wiki/Superboy_Vol_1_38?oldid=1459575"
Community content is available under CC-BY-SA unless otherwise noted.