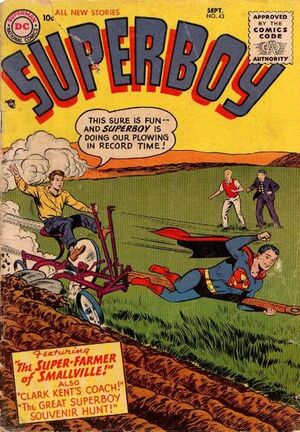 Souvenir hunters after mementos of Superboy’s deeds cause problems for the Boy of Steel.

A farmer secretly torches his own barn and blackmails several boys into working on his farm to make up for it, but Superboy intervenes to teach him a lesson.

Lana Lang insists that Superboy become Clark Kent’s coach, to cure him of his “weakness” and “timidity”.

Retrieved from "https://heykidscomics.fandom.com/wiki/Superboy_Vol_1_43?oldid=1459586"
Community content is available under CC-BY-SA unless otherwise noted.