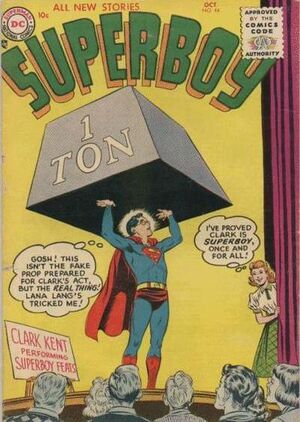 Appearing in "The Amazing Adventures of Superboy's Costume"Edit

Synopsis for "The Amazing Adventures of Superboy's Costume"Edit

When Superboy has to abandon his costume to plug a radiation leak, it falls into the hands of several other Smallville citizens, each of whom experiences an adventure as a result.

Appearing in "The Jobs Superboy Lost"Edit

Synopsis for "The Jobs Superboy Lost"Edit

Clark Kent tries to do odd jobs to make much-needed money for a gift, but finds that his Superboy duties interfere with his work.

Clark Kent is scheduled to perform phony feats of strength at a vaudeville show, but Lana Lang is determined to use the occasion to prove he is Superboy.

Retrieved from "https://heykidscomics.fandom.com/wiki/Superboy_Vol_1_44?oldid=1459588"
Community content is available under CC-BY-SA unless otherwise noted.