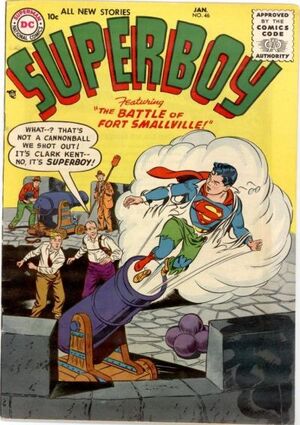 Appearing in "The Boy Wizard"Edit

Synopsis for "The Boy Wizard"Edit

When a freak accident steals Superboy’s super-senses, a Smallville boy with a powerful telescope offers to help him with his super-deeds.

Appearing in "The Silliest Jobs in the World"Edit

Synopsis for "The Silliest Jobs in the World"Edit

Superboy helps out the Langs after Mr. and Mrs. Lang have suffered an auto accident, not suspecting that “Professor Lang” is really a criminal impostor.

Appearing in "The Battle of Fort Smallville"Edit

Synopsis for "The Battle of Fort Smallville"Edit

After Superboy unearths an old fort near Smallville, a military-minded crime-boss takes it over and threatens to expose the Boy of Steel’s secret identity.

Retrieved from "https://heykidscomics.fandom.com/wiki/Superboy_Vol_1_46?oldid=1592130"
Community content is available under CC-BY-SA unless otherwise noted.