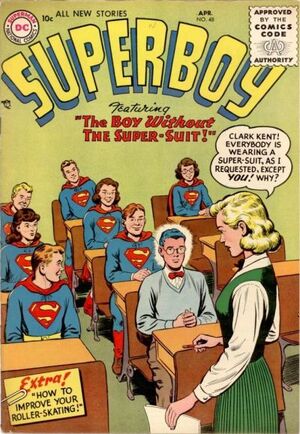 When a dose of radiation scrambles Pa Kent’s mind, he believes that Superboy and Clark Kent are two different persons and that Superboy has kidnapped his son.

To protect his secret identity, Superboy concocts a ruse in which it appears that Martians have given super-powers to Clark Kent, Lana Lang, and Lana’s brother Alvin.

Appearing in "The Boy without a Super-Suit"Edit

Synopsis for "The Boy without a Super-Suit"Edit

Clark Kent returns from a vacation at his grandfather’s home to discover that every student in Smallville is wearing a Superboy uniform, except him.

Retrieved from "https://heykidscomics.fandom.com/wiki/Superboy_Vol_1_48?oldid=1599905"
Community content is available under CC-BY-SA unless otherwise noted.