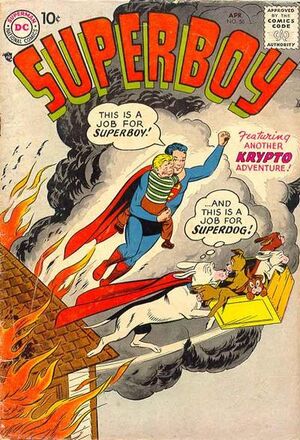 Appearing in "The Secret of Fort Smallville"Edit

Synopsis for "The Secret of Fort Smallville"Edit

When an unknown vandal attempts to sabotage a reenactment of a Ft. Smallville Indian battle, Superboy teams up with an Indian youth and his father to find the culprit.

Lana Lang cannot understand why Clark Kent is going around Smallville writing on all Superboy posters, “SUPERBOY IS A SAP”.

Appearing in "A Job for Super-Dog"Edit

Synopsis for "A Job for Super-Dog"Edit

Krypto asks for and gets permission from Superboy to become a solo hero, attending to the troubles of dogs, but eventually comes to realize he wants to be Superboy’s pet and partner again.

Retrieved from "https://heykidscomics.fandom.com/wiki/Superboy_Vol_1_56?oldid=1606964"
Community content is available under CC-BY-SA unless otherwise noted.