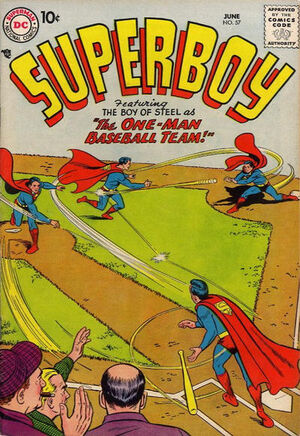 Appearing in "The Strong Boys of Smallville"Edit

Synopsis for "The Strong Boys of Smallville"Edit

The head of a phony strength-increasing racket appears to have put one over on Superboy, but the Boy of Steel turns the tables on him as Clark Kent.

Appearing in "The Boy of the Year Contest!"Edit

Synopsis for "The Boy of the Year Contest!"Edit

When Superboy is forbidden to compete in the Boy of the Year contest, it appears as though he is sabotaging the other contestants. But he manages to expose the real cheat, and Clark Kent receives the honor.

Superboy must play a one-man charity baseball game against the U.S. All-Stars, while keeping his double identity secret from Lana Lang.

Retrieved from "https://heykidscomics.fandom.com/wiki/Superboy_Vol_1_57?oldid=1604236"
Community content is available under CC-BY-SA unless otherwise noted.