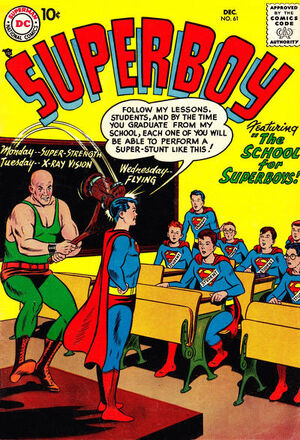 Appearing in "The Shrinking of Superboy"Edit

Synopsis for "The Shrinking of Superboy"Edit

A band of miniature aliens shrinks Superboy temporarily to tiny size so that he can use his super-strength to remove from their spaceship hull a “boulder”...which proves to be a grain of sand.

Appearing in "The Well of Doom"Edit

Synopsis for "The Well of Doom"Edit

Clark Kent falls down a dry well and is kept there by Kryptonite.

Appearing in "The School for Superboys"Edit

Synopsis for "The School for Superboys"Edit

Clark Kent and other Smallville boys sign up for a class, supposedly taught by Superboy, who claims he can transfer his powers to them.

Retrieved from "https://heykidscomics.fandom.com/wiki/Superboy_Vol_1_61?oldid=1592128"
Community content is available under CC-BY-SA unless otherwise noted.