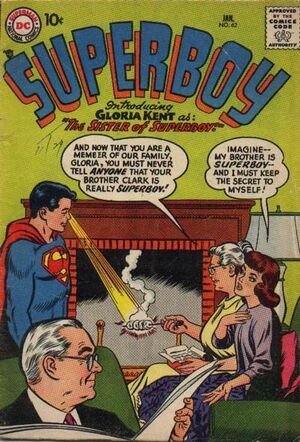 Appearing in "The Story of Superboy's Sister"Edit

Synopsis for "The Story of Superboy's Sister"Edit

A girl named Gloria Alpert mistakenly believes that she is Clark Kent's sister from the planet, Krypton. She stays at the Kent farm until such time that Superboy discovers the truth.

Superboy goes undercover as Alvin Wilson in order to ferret a gang of bank robbers out to kill the real Alvin Wilson.

Appearing in "The Wildest Weather in the World"Edit

Synopsis for "The Wildest Weather in the World"Edit

Professor Lang discovers an ancient cursed idol. Whenever it is within the presence of something green in color, it begins radically altering the weather. Superboy makes numerous attempts to halt the idol's effects. Eventually, he uses his own costume to render the curse inert.

Retrieved from "https://heykidscomics.fandom.com/wiki/Superboy_Vol_1_62?oldid=1572636"
Community content is available under CC-BY-SA unless otherwise noted.