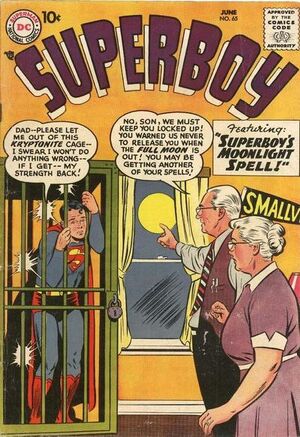 A young alien named Dworn arrives on the planet, Earth and befriends Clark Kent. Clark soon discovers that Dworn has the ability to turn other objects into solid gold. Fearing that unscrupulous men might try to take advantage of the alien’s abilities, Clark sets him up with a cover identity – Alan. As Alan, Dworn temporarily moves in with the Kents and meets Lana Lang.

A criminal known as Ace discovers Alan's true identity and has his mend apprehend Dworn. They force Dworn to provide them with an unlimited supply of gold. Clark changes into Superboy and attempts to rescue his friend. However, Ace is ready for him and keeps Superboy at bay with a piece of Kryptonite. Surprisingly, the radioactive mineral actually provides Dworn with additional super-powers and he aids Superboy in defeating Ace and his goons.

Dworn says goodbye to Superboy and flies off into outer space taking the dangerous Kryptonite with him.

Superboy continues to experiment in his junior lab in the hopes of finding a cure for Kryptonite poisoning. His experiment malfunctions however and a mysterious gas blankets Superboy. The gas has lasting effects on the Boy of Steel and as the moon rises, he finds himself turning evil and terrorizing the town of Smallville.

Before long, the realization of what he has become takes hold of Superboy. He erects a powerful cage inside of his bedroom and asks his parents to keep him sealed up. Jonathan and Martha keep a block of Kryptonite close by to keep Superboy in check. By the following evening however, the effects of the gas wears away and Superboy returns to normal.

Appearing in "The Amazing Adventures of Krypto Mouse"Edit

Synopsis for "The Amazing Adventures of Krypto Mouse"Edit

Tommy Ewell's parents force him to get rid of all of his pets, including his beloved mouse, Fuzzy. He releases Fuzzy into a field, where the mouse proceeds to scamper about until it finds the laboratory of Prfessor Egglehead. Fuzzy interupts the path of Professor Egglehead's Atomic Krypton Ray, and the resulting exposure transforms him into a large bipedal mouse with all of the powers of Superboy.

That night, Fuzzy returns to the Ewell home where Tommy gives him a Superboy costume and dubs him Krypto Mouse. Though his physical attributes have been enhanced, Krypto Mouse still possesses the mental accuity of a common field mouse. He flies off into the night in search of cats and cheese.

The following day, a gangster named Trigger hunts down a snitch named Louie the "Rat". Louie tries to hide by dressing up as in a mouse costume, but Trigger discovers his ruse. However he mistakes Krypto Mouse for Louie and begins attacking him. He is astonished to discover that his target is suddenly impervious to all physical danger.

Later, Superboy assists a distressed cargo ship, by flinging all of its barrels of perishable goods onto the mainland. While Superboy busies himself with the ship, Krypto Mouse arrives on the beach and breaks into the barrels, consuming massive amounts of packaged cheese.

Before long however, the effects of Professor Egglehead's atomic ray wears off and Krypto Mouse returns to being a regular field mouse. Tommy Ewell's parents decide to let him keep Fuzzy as a pet for as long as he wants.

Retrieved from "https://heykidscomics.fandom.com/wiki/Superboy_Vol_1_65?oldid=1580128"
Community content is available under CC-BY-SA unless otherwise noted.