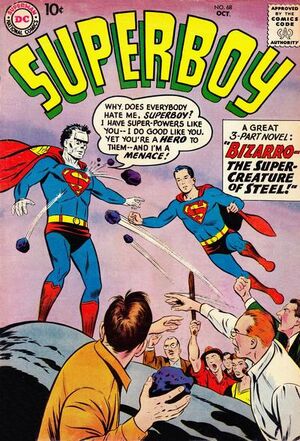 Appearing in "The Boy of Steel vs. the Thing of Steel"Edit

Synopsis for "The Boy of Steel vs. the Thing of Steel"Edit

When a defective duplicating ray created by Professor Dalton strikes Superboy, it creates a grotesque, stupid, imperfect duplicate of the Boy of Steel which nonetheless possesses all of his incredible power. Moreover, it is not affected by Green Kryptonite. Superboy remarks that the creature is “bizarre”, to which the creature replies, “Him call me...(mumble)...Bizarro! Is...is that my name?” Bizarro is basically good-hearted, but cannot control his powers very well, and proves dangerous to Smallville. However, he is befriended by a blind girl named Melissa, who senses his benevolent nature. Superboy is unable to defeat Bizarro by conventional means, but finally senses that the metal of the demolished duplicator ray itself can destroy him. Bizarro deliberately flies into the piece of metal Superboy holds, destroying himself, but creating a vibration that restores Melissa’s sight. Superboy muses that Bizarro may well have understood what effect his destruction would have on Melissa’s eyes, and, as the Boy of Steel flies away, he hears Melissa say, “I never saw Bizarro myself, while blind! But I know, from his gentle voice, that he must have had a kind face!”

Retrieved from "https://heykidscomics.fandom.com/wiki/Superboy_Vol_1_68?oldid=1606472"
Community content is available under CC-BY-SA unless otherwise noted.