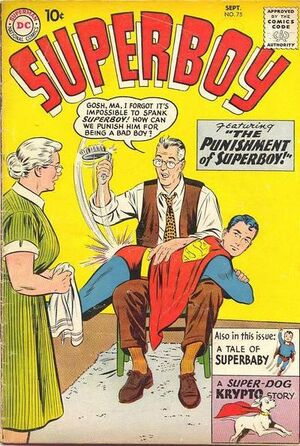 When Lana Lang tries--and fails again--to expose Clark Kent as Superboy on their way to high school, Clark remembers his first day in school, when, in clear sight of a six-year-old Lana, he exhibited his super-powers several times.

Appearing in "How Krypto Made History!"Edit

Synopsis for "How Krypto Made History!"Edit

In search of ancient dinosaur bones that actually taste good, Krypto travels back in time, inadvertently affecting Babe Ruth’s 60th homer, George Washington crossing the Delaware, Walter the Dutch boy plugging the leak in the dike, Robin Hood being attacked, and the future King Arthur pulling the sword from the stone. But when he gets to the era of the dinosaurs, Superboy arrives and pulls him away before he can bite a fresh bone. The Boy of Steel brings his dog to a first-anniversary celebration for him in Smallville. An attempt to get Krypto a frozen mammoth bone doesn’t work out, so Krypto has to settle for dog biscuits.

Appearing in "The Punishment of Superboy!"Edit

Synopsis for "The Punishment of Superboy!"Edit

When Jonathan Kent receives the Father of the Year award, Clark Kent remembers how he was once disobedient to him and, after flaunting his ability to withstand any punishment meted out, was finally disciplined in a meaningful way--emotionally.

Retrieved from "https://heykidscomics.fandom.com/wiki/Superboy_Vol_1_75?oldid=1606621"
Community content is available under CC-BY-SA unless otherwise noted.