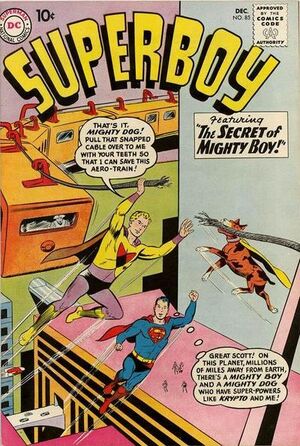 Why did fate choose me to prevent Superboy from saving the life of Lincoln, a great man? I'm responsible for many crimes, but this is the worst of all! Lincoln's blood is on my hands...!

Appearing in "The Mystery of Mighty Boy!"Edit

Synopsis for "The Mystery of Mighty Boy!"Edit

Superboy discovers a rocket buried under the ground which contains artifacts from the planet Zumoor. Flying to Zumoor, he meets Mighty Boy, whose origins and powers are similar to his own. Just as Superboy has many important people in his life with the initials L.L., Mighty Boy has many friends with the initials C.K.

Superboy discovers that his presence is having bizarre effects on his friend, so he leaves, never to return.[1]

Appearing in "The Impossible Mission!"Edit

Synopsis for "The Impossible Mission!"Edit

When Superboy goes back in time to 1865 to prevent Lincoln’s assassination, he finds Luthor there, who paralyzes him with Red Kryptonite, and learns that history cannot be changed.