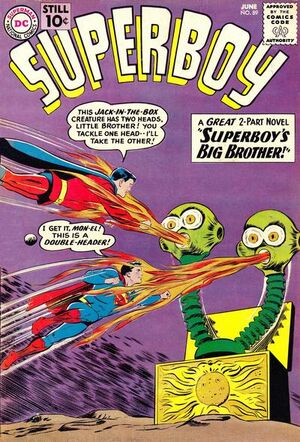 I must warn you, Mon-El! There are dangerous villains at large in the Phantom Zone! Life may be hard... but at least you'll be alive! And I promise you, in the future I'll find a cure for the deadly effects of lead... and return you to the real world!

While out with Ma and Pa Kent, Clark notices a rocket crashing to Earth. Investigating it as Superboy, the Boy of Steel is shocked to find an occupant inside that has a star chart and a medallion around his neck from Jor-El, his own father, about his apparent son. Believing that this person is a previously unknown and long lost brother, Superboy is disappointed to find that the occupant has amnesia. Taking him in with the Kents, they decide to name him Mon-El, based partially on the day of the week he landed on Earth (Monday) and on Kryptonian names. Pa Kent also sets Mon-El up with a civilian guise of Bob Cobb so that Mon-El can assume a civilian life in Smallville, as a brush salesman.

However, Superboy beings to get suspicious of Mon-El's true nature, and begins to doubt his origins when he realizes the buckle on Mon-El's belt is not made of any Kryptonian metal, and Krypto doesn't recognize Mon-El. As a final test, Superboy tries to expose Mon-El to Kryptonite as the boy sleeps and is shocked that it has no effect.

The next day, after Mon-El tries to show up Clark for Lana Lang's affections, Superboy decides to trick Mon-El into "revealing" himself by orchestrating a Kryptonite meteor hoax while they're playing. To do so, Superboy paints lead meteors to resemble Kryptonite and throws them into space so that they land on Earth at the right time. Superboy is shocked to find that Mon-El is effected by the lead meteors just as Superboy would have been effected by real Kryptonite. This causes Mon-El's memories to return, and he reveals that his real name is Lar Grand, who was from the planet Daxam, and landed on Krypton just before it's destruction and befriended Jor-El before departing the planet, and that the crash really did cause him to have amnesia. As lead being the Daxarian's weakness, Mon-El is about to die, however Superboy comes up with a solution to save Mon-El's life, by sending him to the Phantom Zone until he can find a cure for Mon-El's lead poisoning.

Appearing in "The Super-Cop of Smallville!"Edit

Synopsis for "The Super-Cop of Smallville!"Edit

When the entire Smallville police force comes down with a case of measles, Superboy has to sub for them as a one-man squad until they recover.

Retrieved from "https://heykidscomics.fandom.com/wiki/Superboy_Vol_1_89?oldid=1572635"
Community content is available under CC-BY-SA unless otherwise noted.