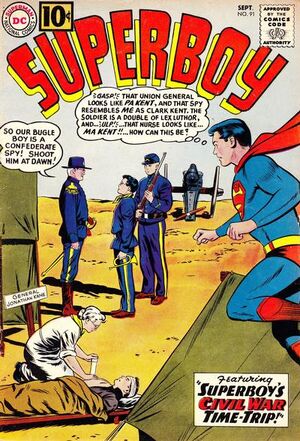 Superboy gets somewhat confused when he becomes involved in a Civil War game two aliens are playing with androids on another planet at the same time Smallville is reenacting the same Civil War battle.

Appearing in "The Superboy of Bigville!"Edit

Synopsis for "The Superboy of Bigville!"Edit

When "Sparkle" Smith, a conman, blackmails a youth from Smallville into playing Superboy to bilk townspeople in a phony charity scheme, the real Superboy learns about it, and stops Smith's scheme.

When Superboy and Krypto are bathed in the flames of a space-dragon who eats Green and Red Kryptonite meteors, both of them become uncontrollably hungry and eat objects of a certain color, no matter what they are. Superboy eats anything green, Krypto eats anything red. The two return to outer space, where they dine on a green and a red moon respectively, until their hunger is sated.

Retrieved from "https://heykidscomics.fandom.com/wiki/Superboy_Vol_1_91?oldid=1592122"
Community content is available under CC-BY-SA unless otherwise noted.