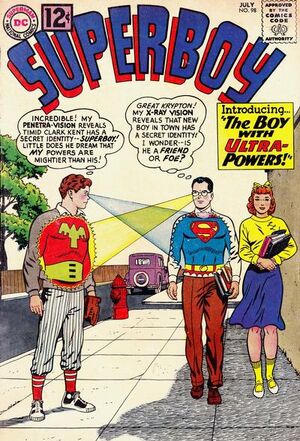 When con-man “Silk” Pomeroy opens the Swankhurst Academy, he and his confederate use it as a way of getting inside information on his wealthy pupils’ parents for robberies, until Superboy enrolls and brings them both to justice.

Appearing in "The Boy With Ultra-Powers!"Edit

Synopsis for "The Boy With Ultra-Powers!"Edit

Meanwhile, both Ultra-Boy and Superboy find out that they are really costumed super-heroes when they both scan each other with their x-ray visions and see their costumes under each other. When Pete is trapped in the Smallville bank's vault, Ultra-Boy and Superboy arrive to save him. However, when Superboy's x-ray vision is unable to peer into the workings of the lead based vault door, Ultra-Boy is able to do so because his vision does not have the same limitation.

Retrieved from "https://heykidscomics.fandom.com/wiki/Superboy_Vol_1_98?oldid=1572617"
Community content is available under CC-BY-SA unless otherwise noted.