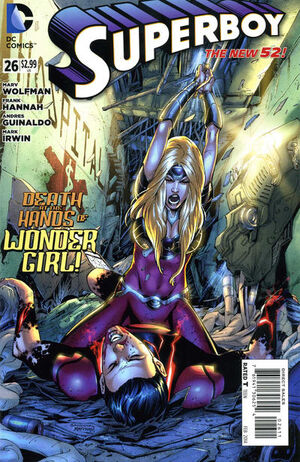 Appearing in "To Hell and Back"Edit

Synopsis for "To Hell and Back"Edit

Having just woken up, Jon attempts to kill Wonder Girl but is too weakened to do so. Jon feigns being unwell to explain his behavior and continues his impersonation of Kon. To continue his facade, Jon sneaks around the hospital and kills a doctor to hide his test results. Consulting with a computer, Jon learns Kon is destined to form the Legion of Super Heros.

Retrieved from "https://heykidscomics.fandom.com/wiki/Superboy_Vol_6_26?oldid=1460111"
Community content is available under CC-BY-SA unless otherwise noted.