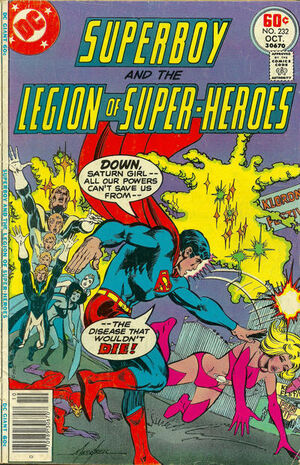 ...even my fellow Legionnaires... everyone was ready to believe the people of Imsk were traitors! It makes me wonder about the people I've chosen for friends! I guess I have a lot of reconsidering to do, Gym... and that's something I better do alone.

Appearing in "The Disease that Wouldn't Die!"Edit

Synopsis for "The Disease that Wouldn't Die!"Edit

In the midst of Klorny Week on Imsk, the Legionnaires face an old enemy who unleashes a shrinking fog on them and on Earth's solar system.

Retrieved from "https://heykidscomics.fandom.com/wiki/Superboy_and_the_Legion_of_Super-Heroes_Vol_1_232?oldid=1459435"
Community content is available under CC-BY-SA unless otherwise noted.