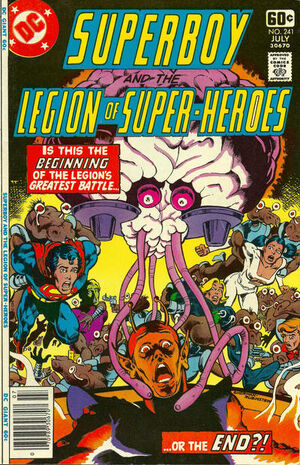 The Resource Raiders weren't just an unusual group of criminals... they're actually the advance guard of an invasion. The Khunds are about to attack Earth in order to destroy it totally!

Appearing in "Prologue to Earthwar"Edit

Synopsis for "Prologue to Earthwar"Edit

As diplomacy between the United Planets and Dominators is about to begin, the Legion is faced with the threat of the Resource Raiders.

Appearing in "My Brother's Keeper"Edit

Synopsis for "My Brother's Keeper"Edit

Light Lass and Timber Wolf are dispatched to Winath to capture an escaped Lighting Lord, but he captures Ayla instead.

Retrieved from "https://heykidscomics.fandom.com/wiki/Superboy_and_the_Legion_of_Super-Heroes_Vol_1_241?oldid=1459444"
Community content is available under CC-BY-SA unless otherwise noted.