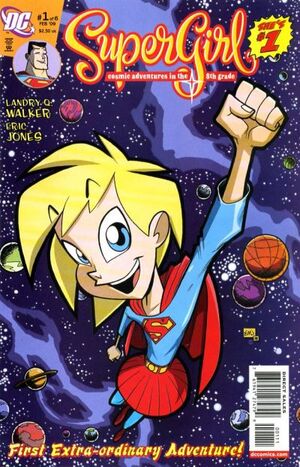 A Kryptonian rocket ship carrying young Kara Zor-El crash-lands on Earth. Fortunately, it happens to land on top of Lex Luthor who is in the midst of a battle with Superman. Kara emerges from the rocket slightly dazed, and discovers that she is quickly developing superhuman powers. One of the first abilities she gains is x-ray vision which enables her to see through everyone's clothes, much to her dismay.

After things settle down, she introduces herself to her cousin Superman. She tells him a colored version of how she came to be on Earth, but Superman presses her for a more truthful story. She relents, and tells him that she had a spat with her parents and hid inside the rocket ship. Her arrival on Earth was purely accidental. She wants to go back home to the moon Argo City, but Superman doesn't have the means to send her back. Instead, he provides her with the cover identity of Linda Lee and enrolls her in public school.

Kara has great difficulty adapting to Earth culture, and her fellow students constantly laugh at her seeming ineptitude. Frustrated, she decides to return to Argo City under her own power. She quickly learns however, that her power of flight will not take her beyond Earth's atmosphere. When she returns home, she finds that Superman has left her a present: a hi-tech two-way radio that enables her to communicate with her parents back home. Content with being able to speak with her family whenever she wants, Kara decides to give Earth another shot.

Retrieved from "https://heykidscomics.fandom.com/wiki/Supergirl:_Cosmic_Adventures_in_the_8th_Grade_Vol_1_1?oldid=1460715"
Community content is available under CC-BY-SA unless otherwise noted.