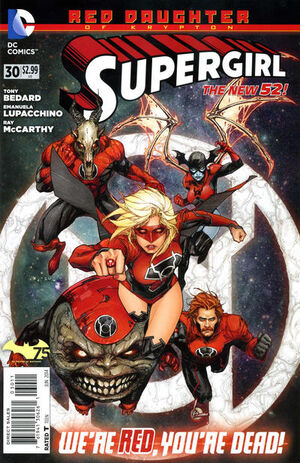 My name is Kara Zor-El. I'm from a long-dead planet called Krypton. On Earth they called me "Supergirl" because I could do almost anything--anything except fit in. But those days of loss and loneliness are behind me now. I've finally found where I belong. I belong in the Red Lantern Corps.

Retrieved from "https://heykidscomics.fandom.com/wiki/Supergirl_Vol_6_30?oldid=1460701"
Community content is available under CC-BY-SA unless otherwise noted.