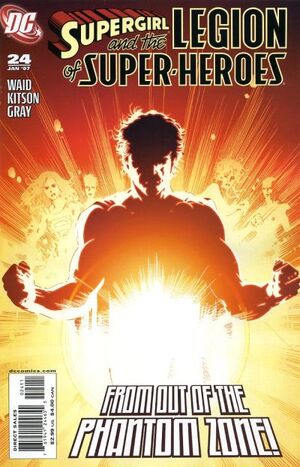 I would give anything in the world for you people to surprise me just once. Listen closely while I explain the next logical step.

Saturn Girl senses a prisoner inside the projector and the Legionnaires take it back to Brainiac's lab. Phantom Girl goes immaterial so that she can establish contact with the person stuck in the projector. She does and learns it is a person called Mon-el. Mon-el warns Phantom Girl that the people the Legion were fighting at the museum are here and they are attacking.

Retrieved from "https://heykidscomics.fandom.com/wiki/Supergirl_and_the_Legion_of_Super-Heroes_Vol_1_24?oldid=1460160"
Community content is available under CC-BY-SA unless otherwise noted.