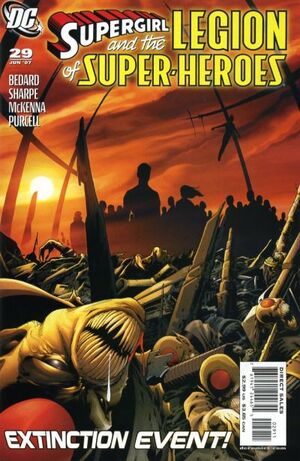 You have your Legion of Super-Heroes. Now so do we.

Appearing in "The Dominator War"Edit

Synopsis for "The Dominator War"Edit

As the Legion of Super-Heroes and the Wanderers are attacking Dominion, the Dominator War is viewed from the Dominators' perspective through the eyes of the Dominator's Top Combat Technologist, who remembers the Invasion a thousand years earlier and Booster Gold's attack against the Dominion to steal a weapon he needed. The Dominator's had misunderstood the meaning of his words ("...I've got 52 worlds to save!") that Earth had gathered an alliance of 52 unnamed worlds to bring down Dominion. The Top Combat Technologist, visited the imprisoned Terror Firma together with a Dominator supersoldier and talked about the Dominator's plan, and he revealed that his plan was not to defeat the "Earth scum", but to invite catastrophic war to let the supersoldiers take the original Dominators' place. He freed the Terror Firma and Sun Boy, who joined the battle outside as Mon-El's lead antitoxin was wearing off.

Retrieved from "https://heykidscomics.fandom.com/wiki/Supergirl_and_the_Legion_of_Super-Heroes_Vol_1_29?oldid=1460175"
Community content is available under CC-BY-SA unless otherwise noted.