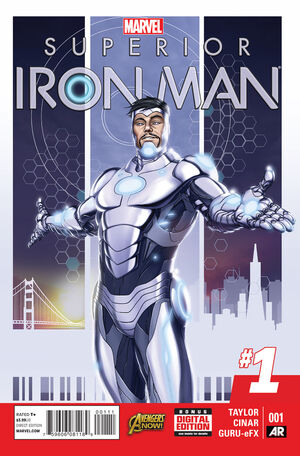 Iron Man was present in the Red Onslaught's concentration camp when the Scarlet Witch cast the inversion spell that finally defeated him. The day was saved, but now, he sees things differently.

Flying over San Francisco, he delivers a mobile device app that gives the user free access to Extremis 3.0, along with instructions on how to use it to change your body into whatever you want.

One week later, Iron Man teams up with She-Hulk on the streets of San Francisco. A kid has been exposed to gamma radiation, gained a monstrous visage and some super-strength, and has started wrecking the street and calling himself "Teen Abomination. Iron Man starts lecturing the new villain about the importance of branding, but he is met with a blow that takes his head clean off...

Only for Iron Man to reveal that he is controlling the armor remotely. Teen Abomination is stunned by the revelation long enough for Iron Man to incapacitate him with a uni-beam. In the aftermath, She-Hulk lectures Iron Man about using too much force, and vocally disapproves of his callous behavior. From his swimming pool, Tony sends a remote recall signal and the armor returns to the lab.

Pepper Potts comes to the pool, and tells Tony that she needs to talk to him in private. Tony says he will meet her inside, but an hour later he saunters in, rather than immediately. Pepper notices that he has started drinking again.

Tony shows her the latest Iron Man suit, which is going to replace the Model 42: the Endo-Sym Armor. A liquid smart-metal design, it utilizes elements of symbiotes, and its boot process is fully psionic.

Pepper cuts out his spiel about its aesthetic appeal by accusing him of not considering the ramifications of giving everyone with a smartphone access to Extremis. Everyone who had no way of accessing the app is the city's new underclass, while everyone who had access to the app has become part of a wave of orgiastic irresponsibility that has swept the city.

On a street corner, a gang of Extremis-enhanced urbanites corner a homeless woman and accuse her of blemishing their perfect future. Before the second punch is thrown, though, they are accosted by Daredevil, who promises violence if they don't disperse.

Suddenly, the leader of the mob keels over in pain. People around the city do the same, as Tony explains to Pepper the second part of his strategy to leverage Extremis to provide Stark Industries, as he still calls it, with a large amount of money.

Every single Extremis enhancile in San Francisco writhes on the pavement as their biology subtly rewrites itself to default. Every single mobile device in the city pings, explaining through a new message that their trial period has expired, and that to continue, they must pay $99.99... per day. Putting on his Endo-Sym Armor, Tony decides to get a good look at the city from the air.

That night, Pepper discusses Tony's condition with someone. She says that years ago, Tony said his greatest fear was not that someone would take the contents of his life and use it against him, but rather that something would take his mind, and use him to destroy his life. Pepper believes that this has happened, and that she and her co-conspirator need to activate "the contingency." Her ally steps from the shadows, revealing that they are wearing an early Iron Man suit, and agrees with her.

Retrieved from "https://heykidscomics.fandom.com/wiki/Superior_Iron_Man_Vol_1_1?oldid=1647325"
Community content is available under CC-BY-SA unless otherwise noted.