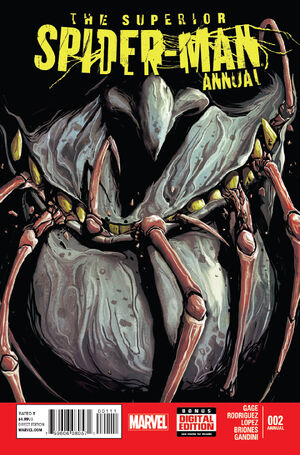 Actually, I don't. I'm not sure I ever will. But I understand that the Phil Urich I used to know... is as dead as my wife. I need to accept it. You have to acknowledge your losses before you can mourn them. But I haven't lost everything. I still have the truth. The ability to find it. Reveal it, and make people understand it. To shed the light on the darkness. Especially when it's hard. Especially when it hurts. To see those responsible exposed and punished. I owe it to the man Phil once was. And to myself. My name is Ben Urich. And I'm a reporter.

• As Goblin Nation consumes New York, the Superior Spider-Man’s world is in flames!

• Who will rise? Who will fall? NO ONE will be the same after this!

Retrieved from "https://heykidscomics.fandom.com/wiki/Superior_Spider-Man_Annual_Vol_1_2?oldid=1455028"
Community content is available under CC-BY-SA unless otherwise noted.