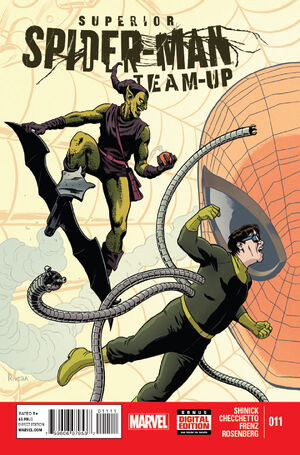 If you had asked me a week ago if I thought I'd be strung up by a Spider-Slayer next to a Spider-Man from the future, I'm pretty sure my answer would've been "no!" In fact, when you boil it down, there are really just three moments in life that people try to visualize ahead of time: their twenty-first birthday, their wedding day and the day they're going to die. For me, however, there was another. The big question being, whether it's was actually a fourth image... or just a different image of the third? Because it's the day I knew I would stare into the eyes of Norman Osborn again. Someone once said the eyes are the portals to the soul. But in this case, there is no soul. So for me it makes his eyes just portals. Portals to another time.

• In the midst of GOBLIN NATION, the Superior Spider-Man thinks back on an ALL NEW never before seen team-up between Doctor Octopus and the Green Goblin!

• You’ve been missing the AMAZING SPIDER-MAN? HERE HE IS! Just as you remember him, facing off with his two greatest foes!

Retrieved from "https://heykidscomics.fandom.com/wiki/Superior_Spider-Man_Team-Up_Vol_1_11?oldid=1505834"
Community content is available under CC-BY-SA unless otherwise noted.