Part of the 'Infinity (Event)' event 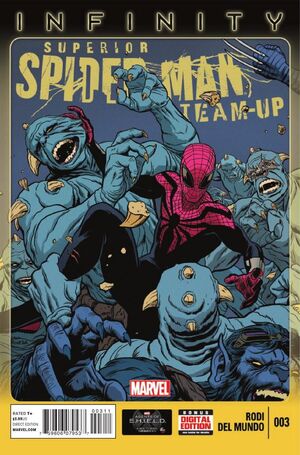 Sylvia Prell is a student who is one of the Inhuman descendants, having similar powers to Sun Girl. She is exposed to the Terrigen Mists after it was unleashed upon Earth by Black Bolt. The manifestation of her electrical powers catches the attention of the power-hungry Superior Spider-Man.

• As Thanos’ forces set their sights one earth, there are few heroes left to answer the battle call.

• But how many heroes do you really need when the most SUPERIOR one of all is ready to defend his turf.

• Featuring the debut of an all-new Sun-Girl!

Retrieved from "https://heykidscomics.fandom.com/wiki/Superior_Spider-Man_Team-Up_Vol_1_3?oldid=1727528"
Community content is available under CC-BY-SA unless otherwise noted.