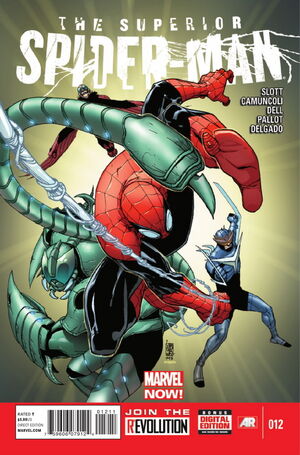 Appearing in "No Escape - Part 2: Lockdown"Edit

• The Raft is complete shutdown. Which means that Spider-Man, Jonah, Glory, and Norah are trapped inside with practically ALL the villains that the Superior Spider-Man has brutalized over the past 12 issues!

• It’s time for a little payback for the Spider-Slayer, Scorpion, Boomerang, and the Vulture!

Retrieved from "https://heykidscomics.fandom.com/wiki/Superior_Spider-Man_Vol_1_12?oldid=1658815"
Community content is available under CC-BY-SA unless otherwise noted.