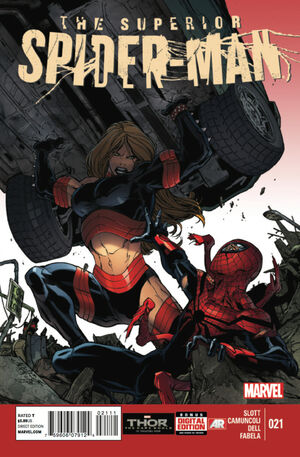 At the Daily Bugle, Robbie Robertson receives his old friend and Bugle member Betty Brant who is rejoining the newspaper, impressed with how much the Bugle changed since she left, but suddenly she, alongside Robbie, gets a "Blast from the Past" when Stunner attacks the Bugle, demanding to know where Spider-Man is. Robbie confronts her, telling her that they're not in good terms with Spider-Man but if she wants to fight him, he'll catch her up through his Spiderbots.

At E.S.U. Otto is fuming after Lamaze's accusations during his thesis presentation, arguing with Anna Maria Marconi that he must take out Lamaze and gain some revenge. Anna Maria thinks he's joking but then sees that "Peter" is missing, not realizing he just jumped into action as Spider-Man. While he's seeking Lamaze, he's called by his Spiderlings about Stunner's attack in the city. Otto decides to confront her personally and once he arrives, he gets a full assault from her, and Stunner screams her motives: to avenge the death of her beloved Otto Octavius (since she doesn't know that Otto is now inhabiting Spider-Man's body). Meanwhile, at Potter's Field, Carlie Cooper visits the tomb of Otto Octavius, now knowing the full truth about the mindswitch, and reminisces about how Peter died as a hero but no one knew. Suddenly, the ground crumbles underneath her, revealing that the body is missing and she is then kidnapped by a green-skinned assailant.

Stunner's assault against Spider-Man continues, with Otto trying to talk her out of attacking but she refuses to listen, bent on making her revenge complete, forcing Otto to wrap her in his new enhanced spider-web, buying some time to send his Spiderbots to track the source of Stunner's VR Interface and shut it down, although once Otto leaves, she easily escapes. Otto returns to E.S.U. to find Lamaze, who is talking with Anna Maria. Otto adjusts his earpiece to listen in on their conversation, hearing Anna Maria determined to convince Lamaze that "Peter" is not doing anything wrong and is one of the smartest men she ever knew, making Otto discover how much she understands him. Suddenly his Spider-Sense alerts him of a bus flying by after it was launched by Stunner, heading straight into Lamaze and Anna Maria, but Otto catches it with a thick layer of his Spider-Web in time to save them, which unfortunately leaves him open to Stunner's assault, who goes as far as tearing his mechanical legs apart. Stunner attacks Spider-Man, wanting him to beg for mercy and avenge Otto's death, but in the nick of time, the Spiderbots manage to shut down Angelina's interface.

After the attack, Otto arrives to the secret lab, finding Angelina unconscious, managing to take away her Virtual Reality System. Once she wakes up, she is shocked to see Otto Octavius in person, just the way she knew him, not realizing that Otto is using the same method of Stunner by making his own "Doctor Octopus" avatar, however, Otto tells Angelina that he moved on while she was in a coma, but he'll always care for her. Afterwards, Otto visits Lamaze, who the next day drops all his accusations against "Peter". After they leave, Lamaze reveals to "Peter" that Otto Octavius visited him and revealed that it was "Peter" who gave Otto all the ideas for his inventions. "Peter" asks him to keep it a secret to avoid hurting Otto's ego, and Lamaze and Anna Maria congratulate him for his earned doctorate.

Meanwhile, at the Goblin's Underground Lair, Menace brings Carlie to the Goblin King, revealing that she was keeping tabs with her for a long time and gives him Carlie's journal that includes all of their evidence of Spider-Man, meaning that now the Goblin King also knows the truth about Spider-Man...

• How will she avenge him? By killing the Superior Spider-Man!

Retrieved from "https://heykidscomics.fandom.com/wiki/Superior_Spider-Man_Vol_1_21?oldid=1727554"
Community content is available under CC-BY-SA unless otherwise noted.