Start a Wiki
Part of the 'Darkest Hours' story arc 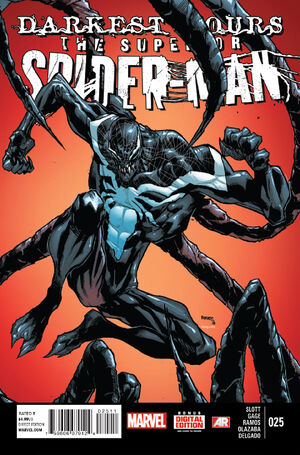 Otto's assault on the criminals starts hard after taking out Bruin and Devil-Spider, leaving Blaze for the end. After the symbiote destroys Blaze's fuel canister and starts choking him, the Avengers intercede starting an all-out brawl against the Venom-possessed Otto. Blaze reports to Roderick Kingsley but he calls his remaining clients to order them to go out robbing banks, taking advantage of the situation between the Avengers and Spider-Man and immediately report to him (as Kingsley, not as Hobgoblin).

The battle goes hard, even with Otto calling in his Spiderlings to assist him, all the while Goblin Knight was spying in Spider-Island II to inspect the site, preparing for an eventual assault. Meanwhile, at the Goblin Underground, Menace makes a full "Goblin Makeover" to Carlie, now fully embracing her Goblin Formula enhancements, now baptized as "Monster" by the Goblin King who asks her once again for Spider-Man's identity. However, Monster refuses to answer until she first knows who is behind the Goblin mask. Goblin replies that he's the original Goblin, Norman Osborn himself, but Monster remains skeptical about it and asks him to take off his mask, which he refuses to do unless she has proven herself to be part of the Goblin family, sending her to attack Kingsley's minions.

The Avengers are having a hard time battling against both Venom/Otto and the Spiderlings, making Cap make the call for reinforcements. Iron Man responds but Cap sends him to pick up Flash Thompson, who is the actual host of the Venom symbiote. Iron Man arrives to Parker Industries to assist both Cardiac and Flash in order to take him to the battlezone and reunite him with the symbiote.

With the battle intensifying, the people of New York are watching it unfold on the screens, now fed up with Spider-Man not only going brutal with criminals and his imposed surveillance, but attacking the Avengers was the last straw, making them rebel against the Spider-bots by smashing them, while the Goblin girls go on a full attack against Kingsley's men, with one of them shooting Monster only to be viciously attacked by her in response, earning her place in the Goblin family. Goblin Knight reports to the King and makes one final hit to one of Kingsley's men killing him, while taunting Kingsley.

The Avengers are starting to fall against the power of the Venom-possessed Otto who boasts about his superiority, until Tony Stark arrives to distract him, allowing Flash, who was wearing Tony's armor, attack from behind and attempt to retake the symbiote. The symbiote fights against them, making Otto realize his mistake and try to cast it out, but finds out he can´t, not until he receives the unexpected assistance from Peter Parker's consciousness, who managed to survive the mind purge. The symbiote finally leaves Spider-Man's body and reunites with Flash bonding together again. Peter sees that Otto doesn't know about his return and it's better to keep it that way until he manages to find a way to take action.

Otto sees an opportunity to get away from suspicion once again, using the argument that he had some remnants of the Venom symbiote taking over and thus explaining his erratic behavior. The Avengers look skeptical about it, but let it be for the time being. At the NYPD Precinct, Aunt May and Jonah Sr. argue with Detective Watanabe, demanding to release Mary Jane. She replies that she's free to go but both her and Peter Parker will be under observation to answer for the disappearance of Carlie. MJ buys some time to avoid answering to a worried May about Peter but she leaves the precinct to return to her apartment, finding "Peter" there. Peter also uses the symbiote argument to explain his behavior and apologizes, to which MJ believes, replying that she still sees the old Peter inside. Otto rejoices that he fooled everyone.

The Avengers are still in disbelief about Otto's argument until they ask Flash to check his mind-link with the symbiote to see anything wrong about Spider-Man, replying that he sees "two different radio stations playing in the same frequency". The team discuss the issue until Spider-Woman mentions the tests they ran on him, which Tony didn't know about. When he searches for those results, he discovers that they have been erased by Spider-Man, prompting Captain America to finally go after him.

• Otto Octavius, the Superior Spider-Man, in a life-or-death struggle against the original Superior Venom!

• Plus: With one last goblin on his side, the Goblin King’s court is now complete!

Retrieved from "https://heykidscomics.fandom.com/wiki/Superior_Spider-Man_Vol_1_25?oldid=1658825"
Community content is available under CC-BY-SA unless otherwise noted.