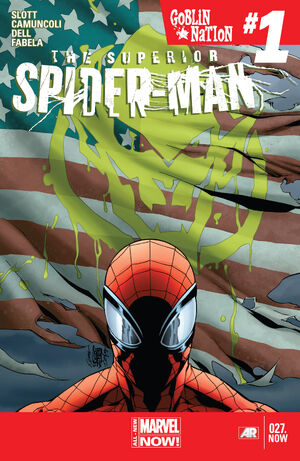 31 days later, the city of New York is fully in the grip of the Goblin Nation. Otto, who has been wounded at an unknown point, thinks to himself how this could all have happened when he had eradicated organized crime in New York. He tries to contact his Spiderlings but fails. Opting to head to the Brooklyn Bridge, Otto realizes that he had been chasing the wrong Goblin all this while. He comes to the realization that the Goblin King is the one behind all this, and wants Otto to know that its all over.

Elsewhere, Peter's consciousness continues to explore the Mindscape for clues into reclaiming his body from Otto Octavius. He makes a note that only 31 pieces of his memories are left, and wonders what he can do with them. Just then, he stumbles upon the memory of his fight with the Green Goblin at the Brooklyn Bridge - the same place where Gwen Stacy died as a result. He wonders why Otto is probing into this, but then reminds himself that he has to focus, and at the current state he's in, cannot afford a rematch.

He sees another memory where as Spider-Man, he is ensnared by Octavius's tentacles. Deciding to delve into Octavius's memories for a way out, he is overwhelmed by the amount of memories, and struggles to hold on. He sees a bright light, and witnesses the moment of Octavius's birth.

The scene shifts to Tribeca, in Otto's apartment. He is tinkering with one of his Spider-Bots, wondering how the Goblin King managed to circumvent his technology. Anna Maria Marconi comes in with a plate of food and tells Otto that he has forgotten to have his meals again, to which Otto replies its because he is helping Spider-Man.

Anna tells Otto that he wont be helping Spider-Man if he himself is a hungry and tired destitute, and Spider-Man should recognize that. Otto jumps at the word "recognize" and realizes that the facial recognition software inside the Spider-Bots was the cause. Otto attempts to contact Utah Jackson about it, but Jackson hangs up on him. Anna brings Otto's attention to the TV, where Jameson is talking about Spider-Man.

Jameson lies to the media that Spider-Man is considered a champion of justice, but then heads to Alchemax, believing that Spider-Man and the Goblin King are in cahoots, and have to be eliminated. Tiberus Stone and Michael O'Mara then show Jameson his private Slayer Patrol. Jameson states that Spider Man must know that he will die by his hand.

Otto decides to visit Uatu Jackson personally as Spider-Man, and they confirm that their technology has been hacked. Afterwards, Officer Yuriko Watanabe is seen at Parker Industries, demanding from Sajani Otto's location. She states that she and her officers will be camping out until he shows up.

Otto manages to trace the location of the Goblin King in the underground and grudgingly admits to himself that he is impressed by how the Goblin King managed to pull it off. Suddenly, his Spider-Sense goes off and Otto is greeted by the Goblin King. The Goblin King tells his subordinates to back off while he and Otto have a chat.

He reveals that he knew Spider-Man was Otto through Carlie Cooper's Journal, shocking Otto. He continues to talk and offers Otto a partnership to rule New York as his second in command. Otto angrily denies it and declares he will free the city from his grasp. The Goblin King laughs and attempts to zap Otto, only to realize it was a hologram. Otto tells the Goblin King that he has been at it for longer than him, to which the Goblin King replies that not long enough to now why they are called secret lairs and orders his men to commence the assault on Spider-Island. At his command, Otto's base is immediately bombarded with missiles.

• The so-called Superior Spider-Man has failed. Under his watch, the Green Goblin took control of New York’s underworld. This is all Otto Octavius’ fault. Now it’s his responsibility to take the Goblin down.

• Win or lose, this shall be Otto’s greatest battle. Whatever you do, don’t miss the first chapter of the biggest event in the entire Superior Spider-Man Saga!

• The End starts here. Superior Spider-Man versus… THE GOBLIN NATION!

Retrieved from "https://heykidscomics.fandom.com/wiki/Superior_Spider-Man_Vol_1_27.NOW?oldid=1727568"
Community content is available under CC-BY-SA unless otherwise noted.