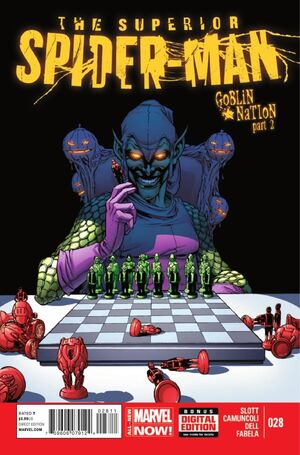 Appearing in "Goblin Nation: The Fall of Spider-Island"Edit

• Goblins! Spiderlings! Super villains! Giant robots! It can only mean one thing: ASSAULT ON SPIDER-ISLAND!

• If you want to see people standing around talking, read another comic. Want to see heroes having a fist fight, go somewhere else?

• You are IN the GOBLIN NATION and this is ALL-OUT WAR!

Retrieved from "https://heykidscomics.fandom.com/wiki/Superior_Spider-Man_Vol_1_28?oldid=1727569"
Community content is available under CC-BY-SA unless otherwise noted.