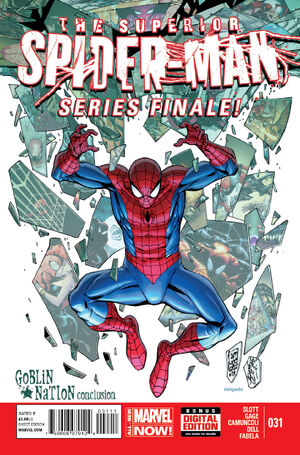 • SERIES FINALE! The end of an era! A tale of triumph and tragedy! The GREEN GOBLIN unmasked! A hero reborn! But what does this mean for OTTO OCTAVIUS?!

• There’s only one man who can save us from the Goblin Nation… PETER PARKER: The one, true SUPERIOR SPIDER-MAN!

Appearing in "Actions Have Consequences"Edit

Synopsis for "Actions Have Consequences"Edit

Some time later after the battle, once the authorities have the city back to normal, MJ, Aunt May, Jay and Ollie return to the Parker Industries site, being received by Peter who apologizes for "his" rude behavior, telling them that he acknowledges that he endangered them by making his alliance with Spider-Man public, but promises to make up for all his mistakes, starting with a press announcement to end it officially. Then he talks with MJ, revealing her that it was Doc Ock controlling his body all these months, but MJ stops him, telling him that she knows this is not his fault but she can't let his dual life affect her anymore. She recognizes and admires the choices Peter has made in his life, but now she wants to build her own life, mostly thanks to her own successes like her nightclub and her new relationship with Ollie.

As Peter leaves to talk to Mayor Jameson, Carlie talks with MJ about all that transpired and, while remembering the death of Gwen Stacy, they point out that even though Peter is a good person, being part of his life means being in constant danger and it is not wrong to step away and take care of their own responsibilities. As such Carlie says goodbye as she intends to head south to visit some friends until her condition is fully healed before moving to a less dangerous city to continue her work as a police forensic scientist.

As Peter reflects that he does indeed bring pain to anyone close to him and all the people he's known has paid a price, he arrives to J. Jonah Jameson's office to confront him after what happened and returns him the Spider-bot Otto used to record his order to execute Alistair Smythe. Jameson replies that he won't accept it since he won't believe whatever he says, being a monster who doesn't own up to the consequences of his actions and instead stomps on others. Peter replies that he won't expect him to believe him but says that he shouldn't fear him, and that he shouldn't take the blame for everything the Green Goblin caused and that he should stay and fight, but once he leaves, he doesn't realize that Jonah had already resigned his post as Mayor of New York City and left promising that from now on, "I do the kicking."

Retrieved from "https://heykidscomics.fandom.com/wiki/Superior_Spider-Man_Vol_1_31?oldid=1645174"
Community content is available under CC-BY-SA unless otherwise noted.