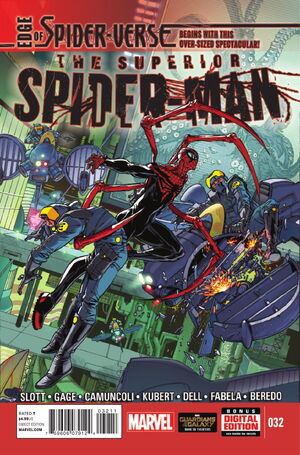 SUPERIOR SPIDER-MAN KICKS OFF THE EDGE OF SPIDER-VERSE!

• How is the Superior Spider-Man still around? Where is he? What is he doing? The road to SPIDER-VERSE STARTS HERE!

This version of Peter Parker starts reflecting on the life he left behind before he became an assassin, this as he battles Karn alongside Logan who is killed instantly. Peter's fiance Alex helps him to distract him, but Peter knocks her unconscius, since Karn only wants to hunt him.

They both land on a train where Karn is set to kill Peter, only to be knocked down by a tree, pulled by Otto who arrived in order to recruit him. Peter has his doubts about, since he wants to protect Alex, but Otto convinces him that Karn only wants to hunt them and she'll be safe as long as she's out of the way, but they can't beat him just the two of them, so an army must be assembled, prompting Peter to accept Otto's offer.

Retrieved from "https://heykidscomics.fandom.com/wiki/Superior_Spider-Man_Vol_1_32?oldid=1658826"
Community content is available under CC-BY-SA unless otherwise noted.