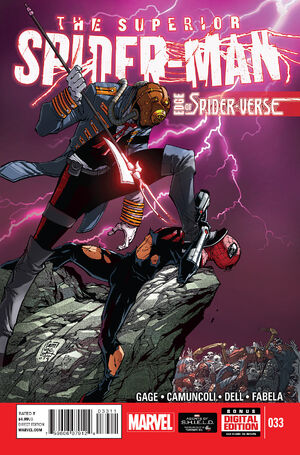 • The Superior Spider-Man takes the fight to Karn, the man working his way through the multiverse, leaving a trail of dead spiders in his wake, but finds himself hopefully over-powered.

• Can Sup’ Spidey find enough allies to make a dent in Karn?

As Karn battles against the Spider-God Ai Apaec, he reflects on his first battle alongside his family against the Great Weaver. Karn's family coordinates a full-front attack but the Weaver cuts the threads prompting them to fall and change the plan. Daemos, Morlun and Verna all fall against the Great Weaver but when it comes to Karn's turn, he hesitates, as the Weaver reveals that Karn dislikes being a hunter as he wishes he could build instead of destroy. Karn's hesitation leads his mother to jump and attack, only to be shredded into strands by the Great Weaver, shocking Karn in the moment.

Karn reflects that his mother's death marked him for life, since she was the only one in the family and the whole multiverse to ever loved him unlike his brothers who were more focused into their hunt. After the attack, Karn narrates that his father arrived and defeat and captured the Great Weaver with his siblings. Seeing the Weaver's power, they used chains designed by Jennix in order to use his power to expand their hunt to all Spider-Totems across the multiverse, afterwards, he and his brothers placed a mask on him, in order to avoid seeing his face for it is a reminder of the shame he brought by being the cause of his mother's death. This made Karn determined into joining the hunt by himself, in order to gain redemption and regain his place in his family

Back into his battle against Ai Apace, Karn uses his power to drain Ai Apaec's energy, effectively killing him, as he reflects that while Ai Apaec's pain is gone, his will continue, as long as he keeps hunting until he earns his place back home.

Retrieved from "https://heykidscomics.fandom.com/wiki/Superior_Spider-Man_Vol_1_33?oldid=1658827"
Community content is available under CC-BY-SA unless otherwise noted.