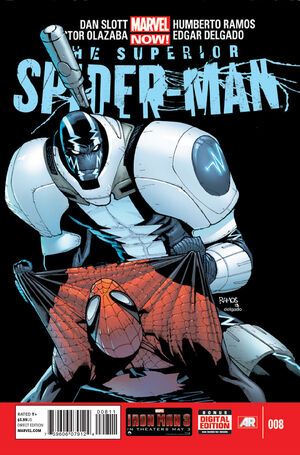 "Troubled Mind" Part 2 • Peter Parker takes a stand! • With a villain acting like a hero and a hero acting like a villain, one man has decided that enough is enough! • More with Cardiac! More surprises! And a moment that will break a lot of hearts! • To save the life of one of Spider-Man's enemies, Peter Parker fights to regain control of his body, his mind, and his destiny! • Is this the beginning of the end for Otto Octavius?

Retrieved from "https://heykidscomics.fandom.com/wiki/Superior_Spider-Man_Vol_1_8?oldid=1724976"
Community content is available under CC-BY-SA unless otherwise noted.