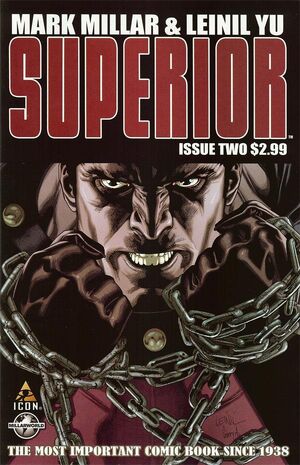 Who is—what is—SUPERIOR? And what the hell is he doing breaking into Jonah’s room in the middle of the night? Superior’s just a guy from comics and movies, anyway, so what did this tights-wearing maniac done to Ollie, Jonah’s wheelchair-bound best friend? But as Superior shows off his powers, Jonah learns that things aren’t all they seem. MARK MILLAR (KICK-ASS, NEMESIS, OLD MAN LOGAN) and his ULTIMATE AVENGERS 2 collaborator LEINIL FRANCIS YU (SECRET INVASION, NEW AVENGERS, ULTIMATE WOLVERINE VS. HULK) continue to bring us a new age of superhero comics!

Retrieved from "https://heykidscomics.fandom.com/wiki/Superior_Vol_1_2?oldid=1475015"
Community content is available under CC-BY-SA unless otherwise noted.