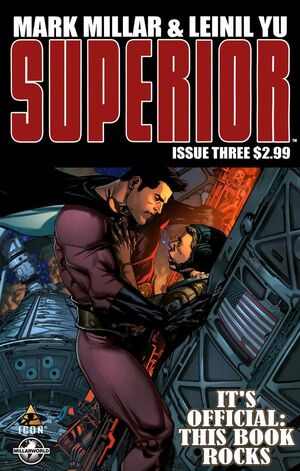 Who is Superior? Where did he come from? And who the hell is after him?!? MARK MILLAR (KICK-ASS, NEMESIS, CIVIL WAR) and LEINIL FRANCIS YU (SECRET INVASION, NEW AVENGERS) continue the non-stop excitement of their all-new super hero series. If you liked KICK-ASS and NEMESIS--do yourself the greatest favor you could ever do. Don't miss SUPERIOR!

Retrieved from "https://heykidscomics.fandom.com/wiki/Superior_Vol_1_3?oldid=1475016"
Community content is available under CC-BY-SA unless otherwise noted.